Two summer ago, I had the privilege of camping at the Eldred Valley. Situated some 34 miles up a logging road (which can only be used after logging hours), and totally unmarked, the Eldred Valley is one of the Sunshine Coast's many hidden gems. The area is celebrated among the rock-climbing community for its amazing climbing routes, but you don't have to be a climber to appreciate the beauty of this place. 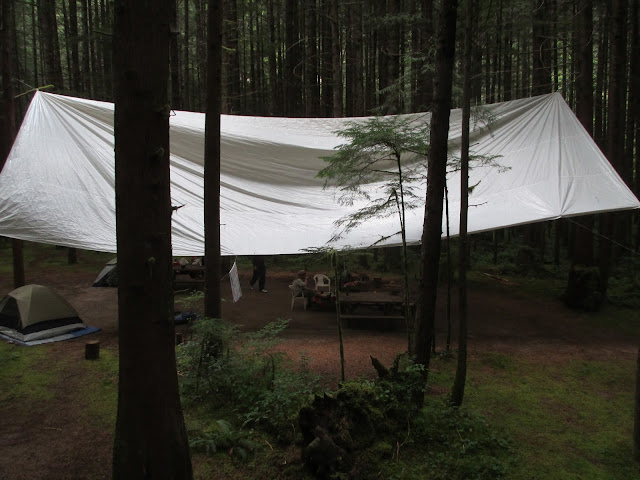 We set up camp for three days in a campsite that could only be described as luxurious. A well-maintained tarp, a hut bursting with cut wood, and the fanciest outhouse I've ever seen were just some of the perks of making the trek up here. In our three days there, we didn't come across a single soul. 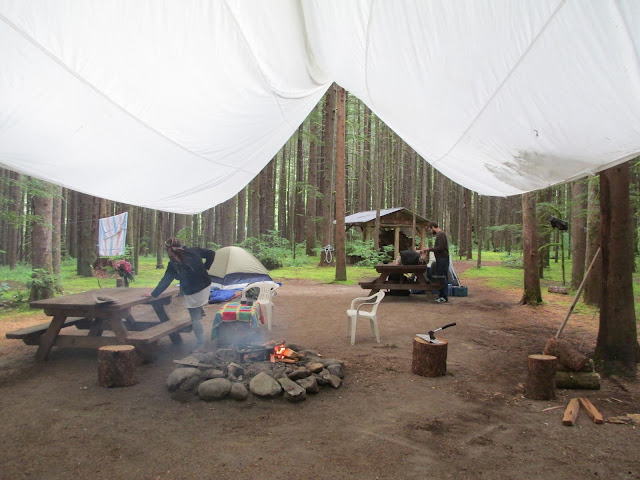 Surrounding the campsite is a relatively uniform expanse of middle-aged Western Redcedars and Douglas-firs, with very little undergrowth—a surreal reminder that the land we're camping on was at one point logged to the ground. 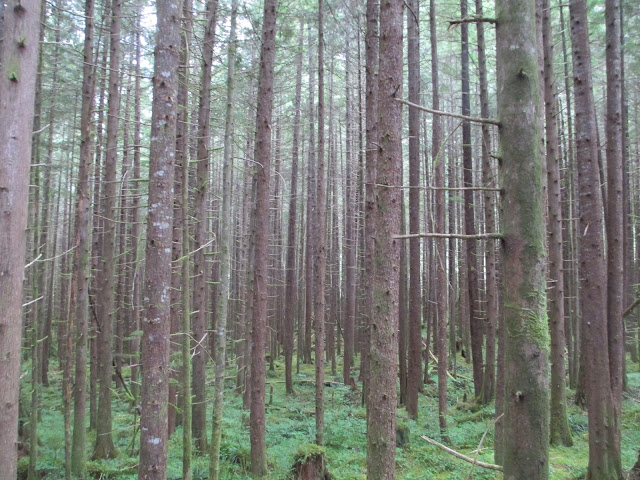 Interspersed among the living trees are a few remnants of the area's past. A couple grandfather trees, if you will. They can be rather inspiring. 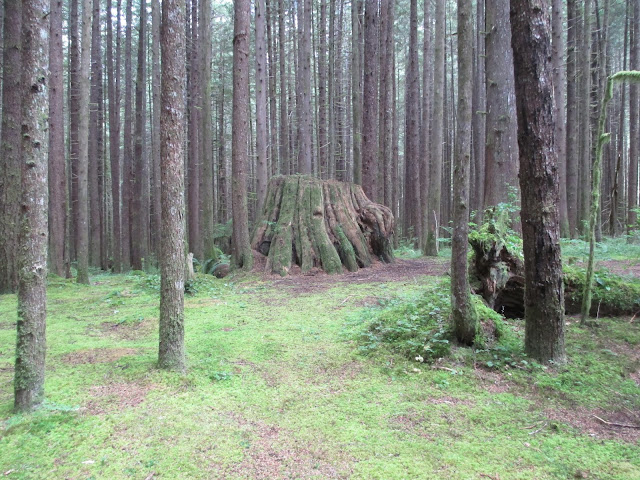 Looking up on a windy day is not for the faint of heart. Expect to have your mind blown as the trees sway at random intervals, shifting the canopy in unpredictable ways. A magical-looking path leads you away from the campsite. Will you follow it? 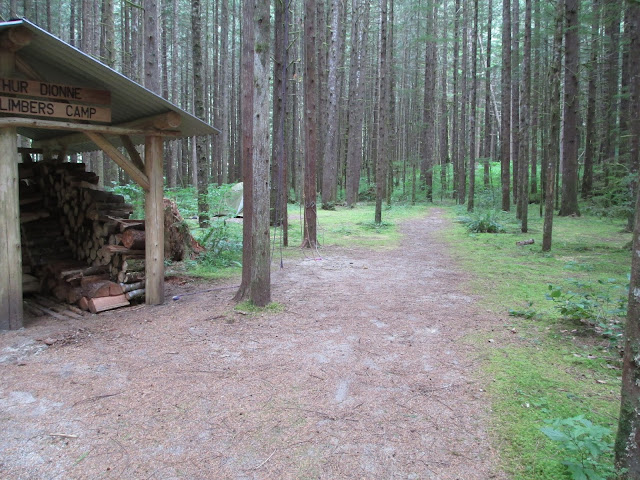 As you meander past a series of stumps and boulders, the roar of the Eldred River begins to rumble your bones. 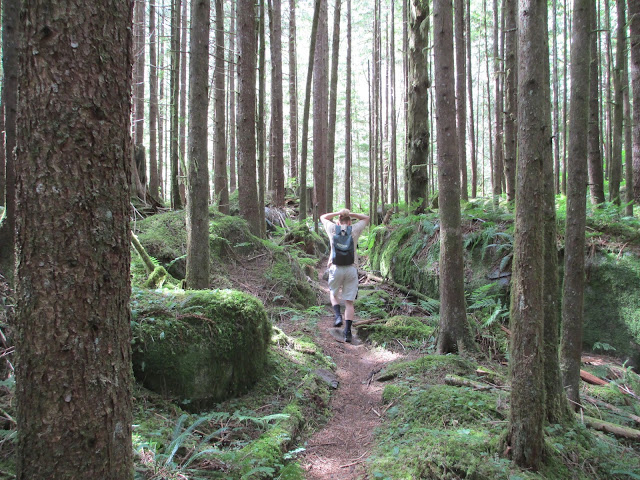 Welcome to the Eldred River! In the early summer, swimming here is a sure-fire recipe for death. The melting mountain snow from miles around drains down this rocky escape, carving incredible hydrodynamic shapes out of the bedrock. By the end of August, the water has slowed down, but must still be approached with caution. 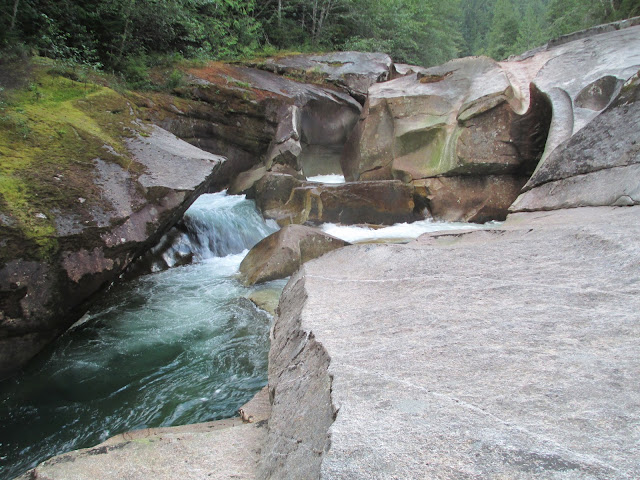 If you're thinking of swimming here, pick a place where you can't get carried away by the current; it can be really strong! Also, the water is freezing, even in the dog days of summer. 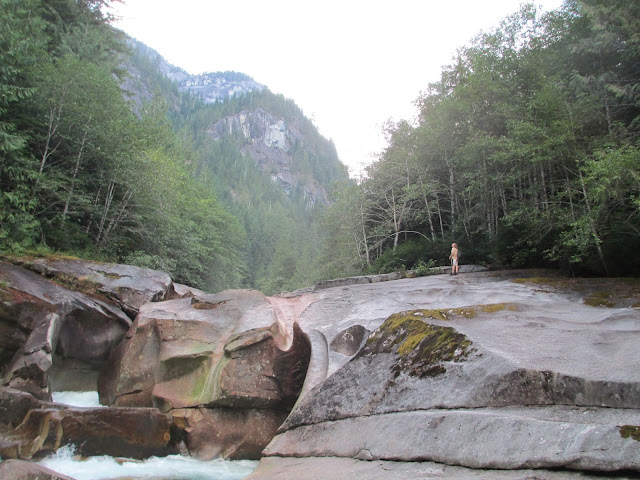 There are many trails that take you up the mountain from the river. As we found out, some of them fizzle out into nothingness, or have not been maintained in years. The hike up to the climbing spots is quite the challenge; the reward is worthwhile, even if climbing is not on your agenda. 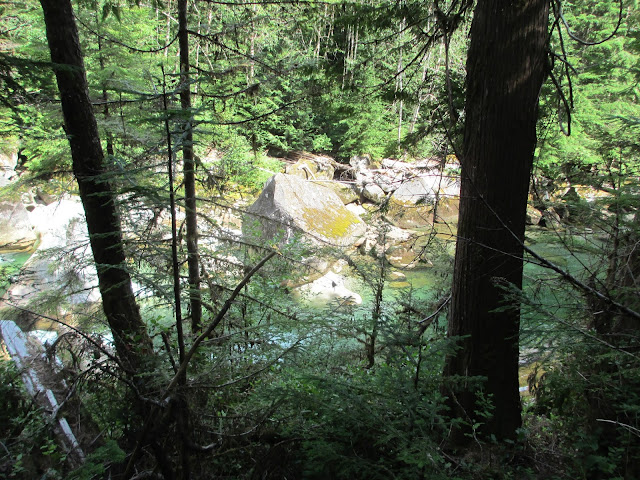 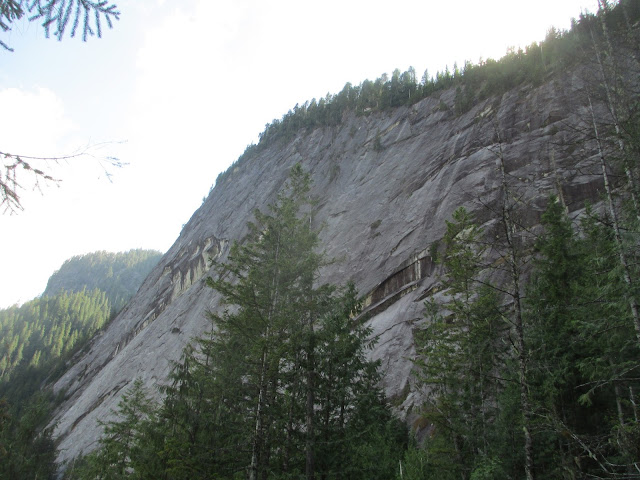 Life hangs on to these smooth, steep slopes. And climbers hang on for their lives. 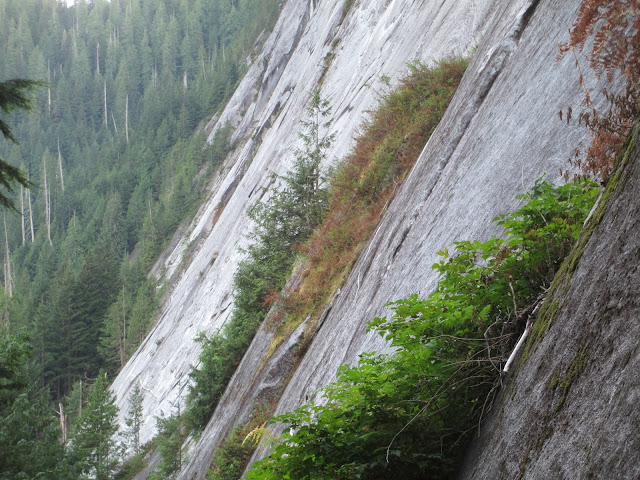 The higher up the mountain ridges you go, the smaller the Eldred River appears. It's astounding how much elevation one can cover in just a couple of hours! 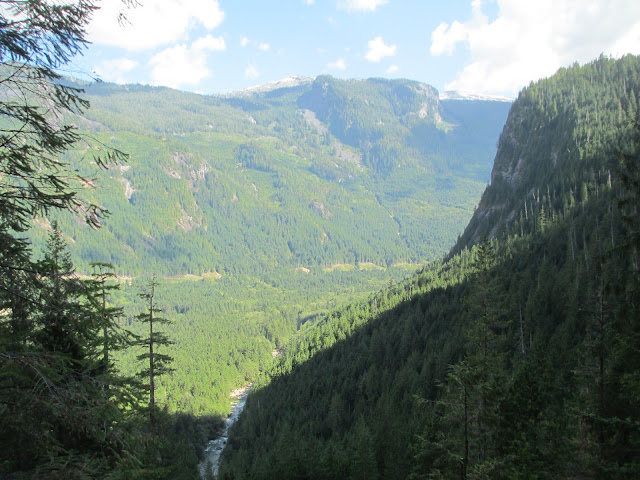 We reached the top of a ridge, sunlight pouring through the forest, and looked over to the other side. 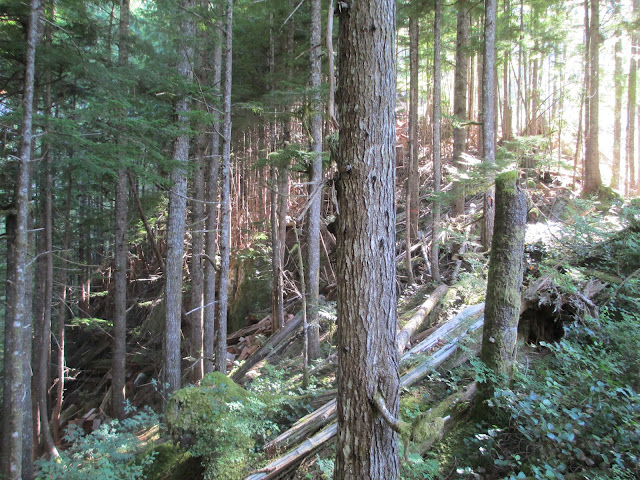 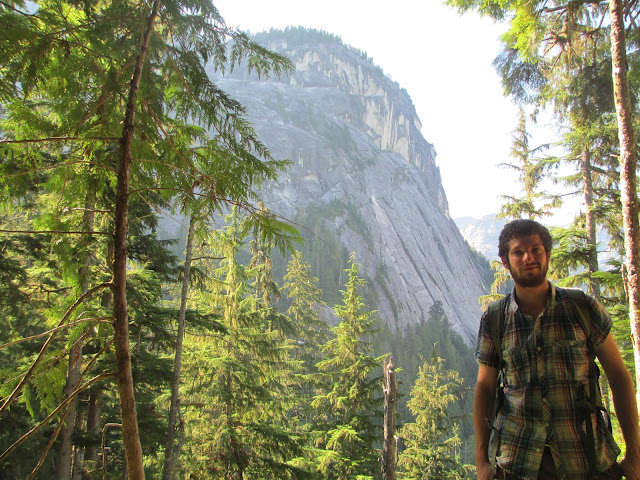 We followed the ridge and continued our climb. We decided that as long as there was an incline upwards, we would follow it, leading us to the top of our local area. 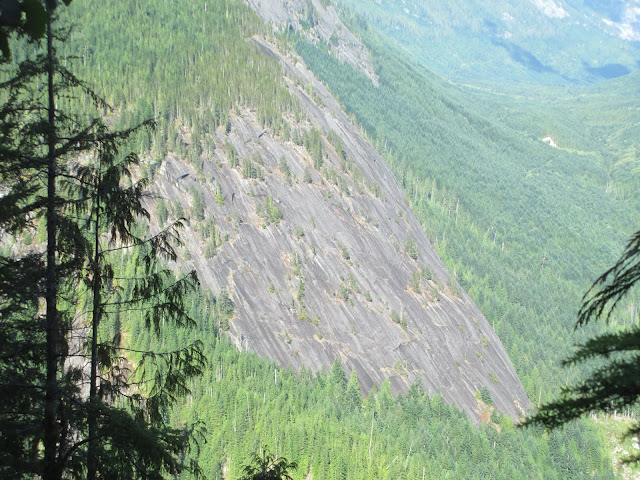 Almost there. What a treat. 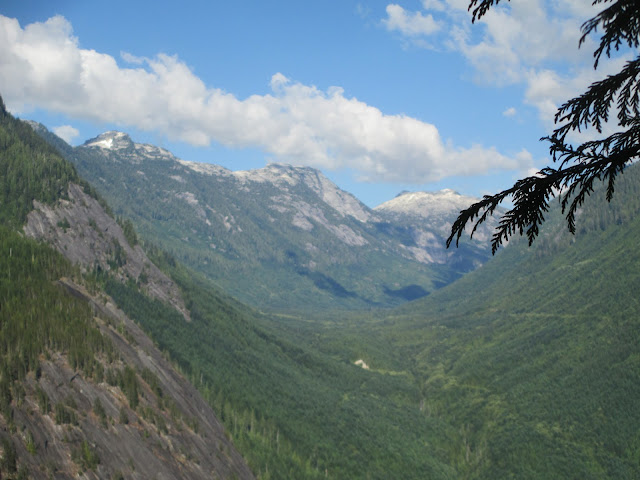 And speaking of treats... what did we find at the top plateau? Hundreds and hundreds of Blueberry bushes, along with Red Huckleberries, Salal Berries, and a few area with Bunchberries. Check out the video here. 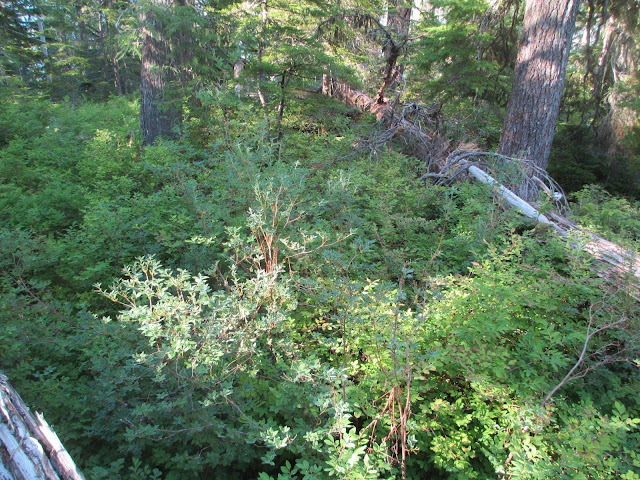 By the time we decided to call it quits, our hands were stained purple with deliciousness. 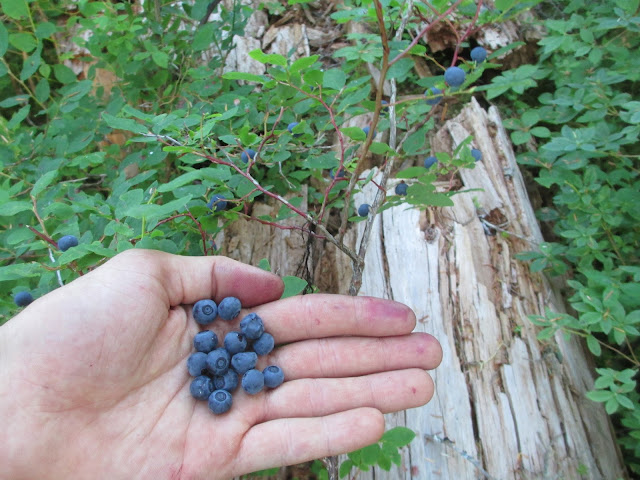 Looking out from the top ridge, it was hard to believe we had been down by the river a few hours ago. What looks like a mountain in the middle of this photo is actually the shadow of the mountain we were standing on, projected upon the valley. The Eldred River can be seen forking through the middle of the photo, nourishing the lush landscape with water and minerals. 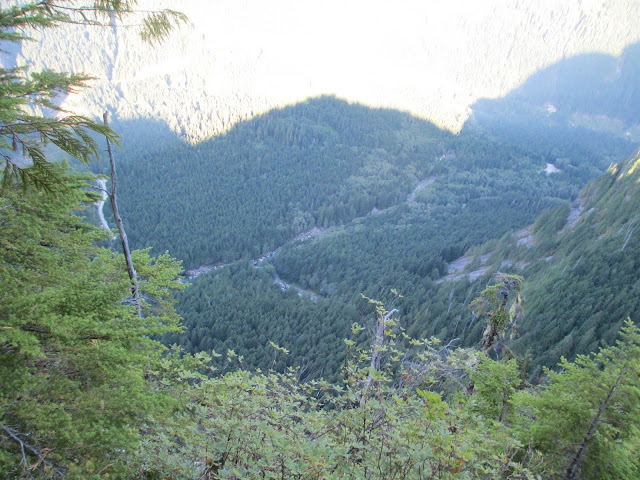 As for us, we would begin our descent. I had tested the Eldred River with my hands and feet, and it was chillier than any water I had ever swam in... but after a whole day of hiking, a cold dip in a mountain-fed river was exactly what I needed.

I'm looking forward to returning some day; I have no doubt that I will.
Posted by Ioni Wais at 6:56 PM