Back when I was volunteering at the Royal Ontario Museum, I heard some of the staff refer to the circular roadway around Queen's Park as the Queen's Park Racetrack. The roadway is technically called Queen's Park Crescent, though its informal name is much more fitting.

When I was at the University of Toronto, I would see students, faculty, and other pedestrians & cyclists risk life and limb on a daily basis just to cross this crescent. Though there are a few traffic lights at which to cross, breaking the law provides a wealth of shortcuts across Queen's Park far too delicious to ignore. And it's exhilarating! 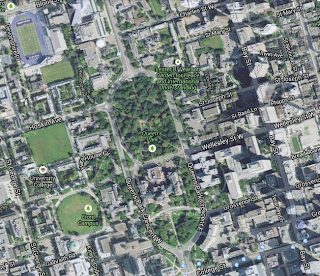 But even if you obey the law to the strictest degree, and diverge from the Toronto norm by never, ever jaywalking... are you safe from the dangers of the Queen's Park Racetrack? You'd like to think so, I'm sure, but this fallen statue would suggest otherwise. 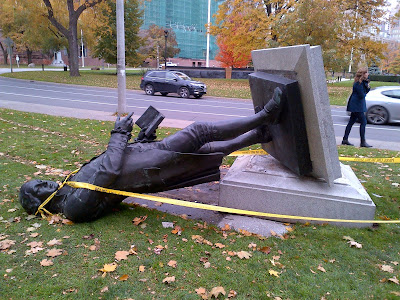 I came across this gem when I was walking around campus the other day. "Oh, that's weird!" I thought. And then I noticed the tire tracks. 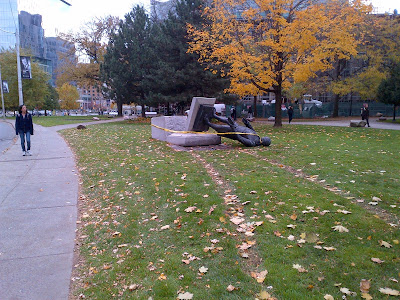 I'll admit that the Queen's Park Racetrack keeps things exciting around campus; you never know when a car is going to fly off the road and obliterate you. But still, the more prudent part of me thinks it might be time to re-think the layout and signage around Queen's Park. And I think that if the statue above could speak, it would probably agree.

Until then, your tweets and texts can wait until you finish crossing the road. Just sayin'.