More specifically, it's a recipe that starts in the intertidal zone of this region.

The intertidal zone is the space between low tide and high tide; it is hidden at certain times, and at other times exposed. To walk this habitat during low tide is to stumble across an unveiled, fleshy world of culinary possibilities.

When the tide goes out, the table is set, goes the Coast Salish proverb. While this holds true in reference to sea-critters and seaweeds alike, the former are protected by provincial regulations, whereas seaweeds—also known as macroalgae or sea vegetables—are left as exposed by a lack of legislative protection as they are by the falling tide. It is within this context of immeasurable abundance and opportunity that I first discovered Fucus vesiculosus, better known as Bladderwrack, Rockweed, Dyer's Fucus or Sea Oak. 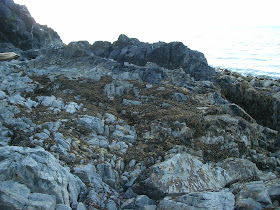 As you can see in the photo below, Bladderwrack is quite distinctive. Like many seaweeds, it hangs on to its rocky substrate with its holdfast, a type of vegetative anchor. Its smooth-margined fronds—algal leaves, so to speak—have a promiment midrib which can be followed as it branches into paired structures. Mature specimens will possess balloon-like bladders which keep the Bladderwrack erect underwater and hydrated during low tide. 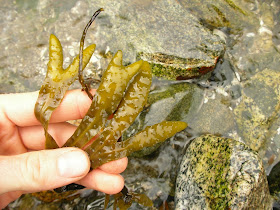 I can't stress how much I love this plant. Every year, I find a big patch and I fill a grocery bag with it, to last me through the winter. From there, I rinse it, dry it, and then dehydrate or freeze it. Occasionally, Bladderwrack will have little shells of marine snails or barnacles; I pick them off to the best of my ability, and settle for the extra calcium. 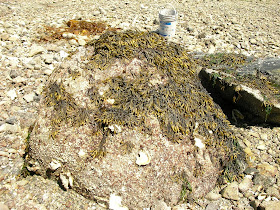 A Google search for Bladderwrack will lead you to all sorts of merchants and suppliers—people who want to sell you something that grows wild in huge colonies; it just goes to show the things we take for granted. Bladderwrack is high in iodine, calcium, magnesium, potassium, sodium, sulfur, silicon and iron, as well as vitamins A, C, E, G, K and certain B vitamins. It is also a good source of phosphorus, selenium, manganese and zinc, among other things. Due to its high iodine content, it is contraindicated for pregnancy, and for people with existing thyroid issues, though it is often used to promote thyroid health.

Incorporating this seaweed into a soup is pretty darn simple. I recommend this soup for cold, stormy nights :) 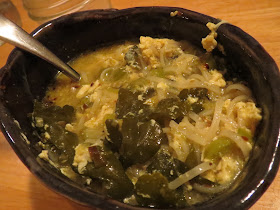