Towards a Deeper Ecology

*** This article was originally published in Fern & Fallers 2016, found inside Powell River Living's July 2016 issue. The article can be read via PRL here *** 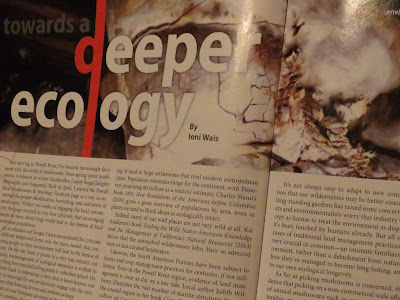 Towards a deeper ecology
--Ioni Wais

Since moving to Powell River, I've become increasingly fascinated with the world of mushrooms. From spring oyster mushrooms, to lobsters, to winter chanterelles, I enjoy fungal delights thoroughly and frequently. Back in April, I started the Powell River Mushrooms & Mycology Facebook page as a way to encourage the proper identification, harvesting, and cultivation of mushrooms. Within two weeks of engaging the local community, the page received its very first criticism, that encouraging people to learn about fungi would lead to the demise of local mushroom populations.

As an educator and forager, I have encountered this criticism in different shapes and forms over the years, namely that connecting people to their environment will lead to the demise of nature.  On the one hand, it points to a very real concern: our ongoing mismanagement of ecological resources is evident in everything from breached tailing ponds to suburban sprawl. On the other hand, it undermines a story that is lesser-known: our ability to meaningfully and productively engage with the environment while fostering diverse and resilient ecology.
When we read European accounts of the New World, along with the countless educational textbooks they've inspired, it's easy to see why we've become so skeptical of our ability to interact with nature. We're presented with the discovery of a pristine continent of wilderness, barely inhabited and virtuous by way of its lack of human influence. But the idea of a hemisphere untouched by human hands is what geographer William Denevan of the University of Wisconsin calls the pristine myth. We know that by the time Columbus set foot in the Americas, its landscapes had seen everything from agricultural clearing and burning of land to large settlements that rival modern metropolitan cities. Population estimates range for the continent, with Denevan proposing 60 million as a realistic estimate; Charles Mann's book 1491 gives a great overview of populations by area, even in places we tend to think about as ecologically intact.

Indeed, many of our wild places are not very wild at all. Kat Anderson's book Tending the Wild explores traditional land management in what is now California, showing that the untouched wildernesses John Muir so admired were in fact curated landscapes. Likewise, the North American Prairies have been subject to burns and crop management practices for centuries, if not millennia. Even in the Powell River Region, evidence of land management is clear as day on a low tide. Local author Judith Williams, illustrates the vast number marine structures through the coastal region in her book Clam Gardens: Aboriginal Mariculture on Canada’s West Coast; in Powell River, these structures helped support regional populations of as many as 30,000 people... talk about food security!

Looking further south, BBC documentary Unnatural Histories highlights recent and ongoing archaeological work and its fascinating findings—that the dark, rich soils of the Amazon are not naturally-occurring, as was previously thought; they are a product of its people, who built up stable, carbon-rich soil using bio-char over countless generations. This means that, to some extent, the largest and most fertile tract of forested land we have in our collective conscious is a large-scale garden, rather than an untouched sanctuary.

It's not always easy to adapt to new concepts, and the notion that our wildernesses may be better conceived as a series of long-standing gardens has raised some concerns: many researchers and environmentalists worry that industry will take this concept as license to treat the environment as disposable, given that it's been touched by humans already. But all of these enduring cases of traditional land management practices have something very crucial in common—an intimate familiarity with the environment, rather than a detachment from nature. This is indeed how they've managed to become long-lasting, and is thus crucial to our own ecological longevity.

As far as picking mushrooms is concerned, there is little evidence that picking on a non-commercial scale affects populations of annual mushrooms such as oysters, lobsters, pines and chanterelles; many European cities encourage mushroom-picking at certain times of the year, with no indication of declining stocks. As it turns out, there are factors that affect mushroom ecology far more extremely than picking: deforestation, soil compaction, invasive plant species, changing climates—these can all have devastating effects on mushroom populations, and are a very real part of our ecological and social environment.

When it comes to picking perennial mushrooms, like reishi or turkey tails, sustainable picking is far more nuanced. In Coastal BC, there is a perennial mushroom known as the Agarikon; it is anti-inflammatory, antibacterial, antiviral and has shown strong action against tuberculosis in laboratory settings. While most of its habitat has been wiped out, it is still found in our region, growing on standing (and sometimes on downed) first-growth Douglas-Firs. At a time when multidrug-resistant tuberculosis is on the rise, keeping an inventory of these organisms can be literally life-saving. The use of Agarikon among the Coast Salish is a little-studied, fascinating topic being brought to light by famous mycologist Paul Stamets. Stamets does not recommend the harvesting of these wild mushrooms, though he cultivates them in a lab setting—his intimate familiarity with their ecology has allowed him to grow them without compromising wild populations. Indeed, many folks from the PR Mushrooms & Mycology group are pursuing the cultivation of various wild and domesticated mushrooms as a way to safeguard the ecological resources of Powell River, and encouraging others to do the same. But even learning the difference between annual and perennial when it comes to mushroom fruiting is part of building the ecological literacy and intimate familiarity which is so crucial to our own ecology.

By engaging with our environment, we shape the world around us—we inevitably shape the world around us, as does every living thing that lives, and breathes, and eats. We're already well-versed in what happens when we engage from a standpoint of detachment from nature: the destruction and depletion of lush ecosystems. We're only starting to rediscover what is possible when we engage with from a place of intimate familiarity, recognizing the tremendous work which has been done before us.

So, if our great wildernesses are indeed great gardens which were started long before our time, how can we best tend to them in today's day and age? Surely, we'll have to learn to garden together, working towards a deeper ecology with every member of our ecosystem.